written by Elite Associates
There's no doubt this art is designed to make you think.

In the spirit of our Green Edition, it is only right that the theme extends to our choice of creative for the Artist Digest in some way. There can often be some confusion surrounding which genre to categorise artists under; even in researching ‘green’ and ‘sustainable’ artists, there are many sub-groups and distinctions that can prove too much for the untrained critic. Nature has always been a source of inspiration for art; rooms of near every major gallery are filled with landscapes and even cavemen called on the world around them to depict upon the walls. Beyond depiction, artists have frequently used natural materials in the creation process and even engage with the land itself – for going the boundaries of the gallery. With its origins in ‘Land Art’ the broader term Environmental Art came to be, encompassing all of these practices, but like anything creative, it has continued to evolve and incorporate new meanings; especially as artists extend into public and urban spaces.

Ecological Art, or more commonly eco-art, began to receive attention from the 1970s, but it is not until the 90s that the term became more cemented in its own right. With some placing it under the environmental art umbrella and others claiming it as its own entity, an exact definition can be hard to pin down. One currently in circulation comes from the EcoArtNetwork: "Ecological Art is an art practice that embraces an ethic of social justice in both its content and form/materials. EcoArt is created to inspire caring and respect, stimulate dialogue, and encourage the long-term flourishing of the social and natural environments in which we live.”

The artist, or more accurately artists, that we have chosen to highlight this issue are Luzinterruptus -an anonymous collective that definitely lives up to some of the eco-art philosophies.  Reclaiming spaces, informing and engaging the public; they provide a commentary not only on environmental issues but social and political ones too. Minimal information is available about the group of Spanish natives, but much can be read about their installations that have popped up around the world. 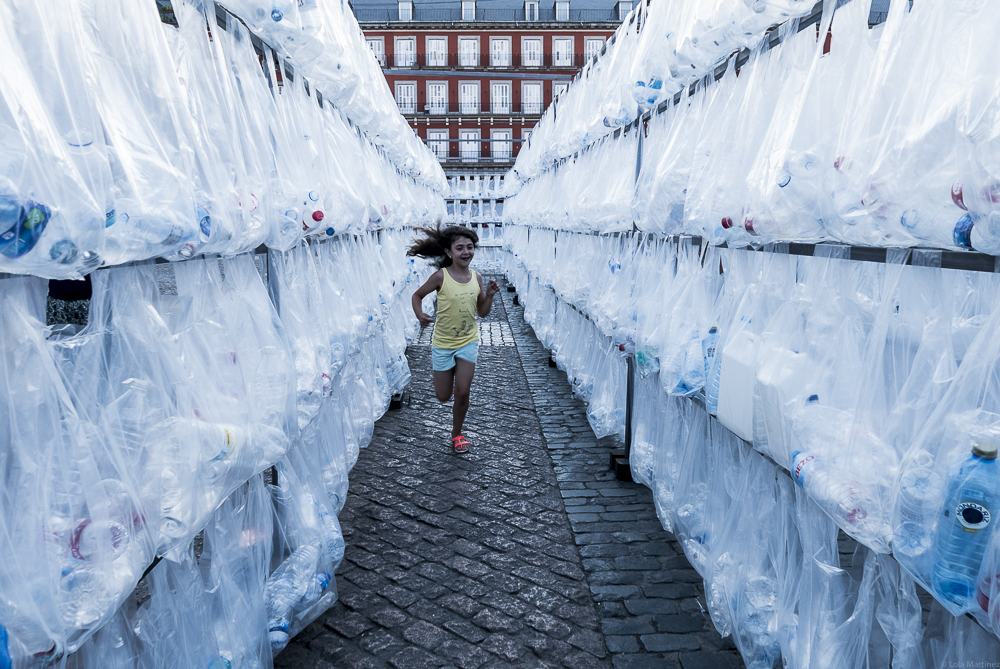 Since 2008, the collective has worked with every day and often recycled materials to create installations or ‘urban interventions’; drawing attention to forgotten or abandoned places in the chosen city in an almost guerrilla-esque or graffiti artist-style way. The other common denominator is the use of light. In fact, you really need to witness their works under the cover of darkness to truly appreciate their merit. Their most recent piece, seen on display in Madrid this July, was simply named “Labyrinth of Plastic Waste” because that is exactly what it was. Set in the Plaza Mayor and created using bottles that had been consumed in the square during a month, the collective state of the piece:

“The idea was to graphically visualize the amount of plastic we generate in our daily lives which we don’t often recycle accordingly. As a consequence, all this plastic is dumped in nature and ends up floating in the ocean, forming huge plastic islands that are destroying the marine ecosystem and will not ever decompose.

Bearing all this in mind, we thought it was paramount that the piece didn’t look friendly. Quite on the contrary, our intention was to make the public feel certain discomfort when entering it.

In order to achieve this, we build a structure with an intricate path and narrow passages which force visitors to keep turning, thus producing a feeling of disorientation and a certain unease after a few seconds as it was impossible to guess how far the exit was. There were no reference points in its interior and the heat and the smell of plastic enhanced a definitely oppressive experience.”

See the video below and for more examples of Luzinterruptus works, scroll the images above or visit their website.

Previous article
The Green Fashion Revolution
[Back to top]